Close encounters at the third phase

Keeping distances is proving to be a highly effective strategy for containing a virus, the actual behavior of which is still quite uncertain in scientific terms, except for its direct relationship with human agglomerations. The precautionary principle has again shown to be the safest one to deal with uncertainty on the basis of certainty. 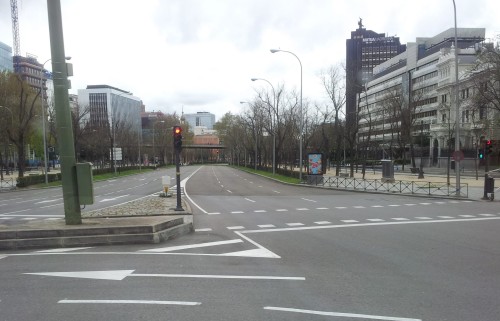 Image of the axis of the Castellana in Madrid on March 22, 2020, in full confinement phase.

However, for the sake of consistency, this principle should also be applied when articulating strategies to face the post-confinement scenario from the perspective of urban and territorial planning in order to avoid the risk that fear of an invisible but undoubtedly urban-phobic virus inevitably leads us to throw off the baby with a bathing water that might be too clean in this case.

In this sense, it is advisable to look back in time to realize that this risk has already materialized in the history of urban planning itself and that we are still paying the consequences of a monofunctional conception of hygiene that, a century ago, stigmatized the traditional city itself as the focus of all the diseases due to overcrowding, leading to paroxysm the policies of sventramento (gutting) of the traditional fabrics that had begun with the nineteenth-century Haussman urbanism.

The real success in the fight against urban pests that formed part of the very origin of urbanism as a discipline, under the English and French health laws of the 1840s, which allowed the survival of the city as a civilizing device, seemed enough guarantee to continue advancing towards the most radical forms of hygienic surgery that emerged in the first decades of the 20th century.

It should not be forgotten that the final drafting of the Athens Charter, the catechism of the Modern Movement on which urban reconstruction was inspired after Second World War II, was carried out by Le Corbusier, a declared hater of what he called contemptuously the corridor street, that is, the street with commercial fronts on the ground floor, sidewalk and causeway, alignment trees and other elements that, without losing continuity with the street-souk of the medieval city, had characterized the city up to now as a spatial and social expression of the convergence between the urbs, the polis and the civitas, as a complex and dynamic setting for socialization and mix of uses.

The 'visionary' proposal of a city with separate functions, made up of large blocks and residential towers widely separated by ample avenues to allow the passage of the sun to the last corner of each dwelling, and immense parks that covered the space 'liberated' by the high-rise buildings, with urban motorways connecting meticulously distanced packs of uses, was enthusiastically embraced on the left and right of the political spectrum, both by the public and private sectors, fascinated by the bright and shadowless images drawn byf Hilberseimer or Le Corbusier and, above all, hypnotized by the opportunity for legitimately occupying land and constructing buildings in an accelerated way, two strategies that fed the wet dreams of a economic system about to enter the Thirty Glorious years of unstoppable growth.

The American model of sprawled single-family housing, at the service of the car, the television, and the work of the woman locked up at home, constituted only a horizontal translation of this same philosophy associated with the speed of production and movement as an end in itself. In the subconscious of both modalities, in any case, lies the ghost of a hygienic bubble surrounding the individual as an isolated monad of the social and the illusion of an abstract, homogeneous space, without attributes, capable of being occupied ad infinitum. 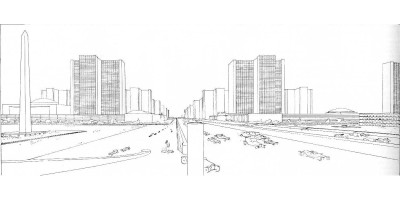 The city of speed and long distances: a wet dream of modernity (Le Corbusier, Plan Voisin, 1925).

Anomic and unequipped residential peripheries, amorphous and nameless spaces between blocks, inadequate for coexistence, impossible to maintain; large extensions of historical fabric destroyed or invaded by the car; ghostly suburban single-family housing developments; pendulous tides of commuters traveling from home to work and from work to home ... there is no need to emphasize what were the consequences of a model of speed-adict, chronophagous and energivorous city, supposedly  based on a deliberately simplistic and schematic vision of the hygienist postulates.

It has been the gradual irruption to the foreground of the ecological paradigm as a new way of understanding the world, in view of the planetary degradation, the depletion of resources and the climate crisis caused by the aforementioned model of urban expansion, which has allowed, along the last half century, to glimpse the constituent elements of a new urban model based on the careful study of the mistakes and successes of the past, but, above all, on the understanding of the interrelation between the flows of energy, matter and information, and in clear awareness of limits, all within a frame of reference in which nature is not a differentiated subject but the primordial fabric to which we belong as a species.

Among these constitutive elements, density, compactness and mix of uses appear as basic conditions to promote in the urban environment the strategy of sharing space and resources, unavoidable in a scenario of finite limits, and as mechanisms to promote socialization and conviviality scenarios, characterized by the exchange of information, services and affections that constitute the civilizing essence of the polis. Short distances are, in a nutshell, the fundamental condition underlying this ecological model of the city.

The temptation is great to settle in the apparent incompatibility between this desirable model of urban sustainability and the inescapable emergency strategies imposed by the threat of a virus that feeds on human contact. But letting yourself be overcome by this temptation implies blindly opting for one or the other extreme, facing the serious consequences of forgetting the other. In urban planning, the option of maintaining distances at all costs can open the door again to urban sprawl models, proven unsustainable, or give an undesirable boost to segregation models such as gated communities, conceived as fortresses for global elites. From this perspective, on the other hand, the compact and diverse Mediterranean city model, an example of urban sustainability under the ecological paradigm,  might be seen from now on as a risk scenario.

On the contrary, not considering excessive density and overcrowding as risk vectors can contribute to underestimating the need to urgently address as a global sanitary problem the reality of a planet of slums (ref. Mike Davis) and deregulated cities, true sanitary time bombs already activated by the pandemic, especially in Africa and Latin America, with unimaginable consequences

However, the new ecological paradigm offers us keys to face from the point the view of complexity the apparent dilemma between reducing and maintaining distances, turning it into an opportunity to, on the one hand, reinforce the arguments implicit in the city model of the mix of uses and short distances and, on the other, to solve the dichotomies that some versions of this model still present, such as those that advocate in a simplistic way a linear increase in density as a measure of sustainability, blindly avoiding the problem of overcrowding. 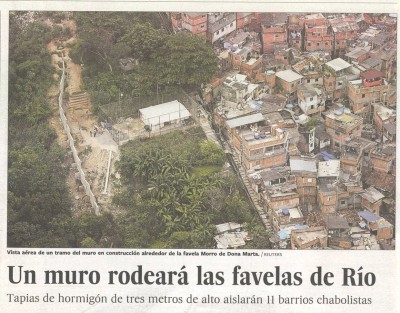 Segregation and deregulation as sanitary time bombs: the uselessness of walls.

For this, it is paramount to distinguish between immediate strategies to fight the current health crisis, which must inevitably be governed by a criterion of effectiveness in the short term, and the objectives of transformation of the model in the medium and long term, which must include all the other threats which we are facing as a species, and especially the environmental crisis. The difference and complementarity between adaptation measures, directed to the effects, and mitigation measures, focused on the causes, used in the fight against climate change, can serve as a reference here.

The challenge is to identify very clearly those strategies that can best help from this very moment to achieve these transformation objectives, distinguishing them very well from those whose maintenance over time could contribute to dangerously aggravating the structural problems of the relationship between the urban and the natural environment, accelerating the environmental disaster. In short, it is a matter of transferring to the environmental sphere a logic that appears evident in the economic field.

There is much progress being made by expert thought these days in this regard, especially in the field of mobility, and the city of short distances and mix of uses, renamed the city of fifteen minutes, appears more and more as the most promising strategy for an urban model addressing both environmental and sanitary challenges. According to this strategy, the space currently colonized by the car, which now forces pedestrians to unnecessary crowding in their reduced circulations lanes, can be released for all kind of active modes of mobility, giving place to a city with renewed opportunities for fruitful social exchange without the risks of overcrowding.

On the other hand, the strategies proposed and urgently implemented for public transport, although they may be unavoidable in the short term, are objectively unsustainable in the medium and long term, as they inevitably lead to energy and material consumption levels per passenger that reduce significantly the proven effectiveness of public transport. That is why it is necessary to start creating new narratives that, while advocating for the elimination of unnecessary trips, help not to feed the irrational fear of the body of the other and present as desirable the recovery of social contact, since the opposite might result in the embryo of a dystopian scenario of closure of the social.

There are many other fields in which this view must be applied to the search for threats and opportunities, beginning with the risk of exploitative colonization of time by telework as opposed to the opportunity offered by it as a mechanism for flexibility, conciliation and reduction of unnecessary travel. The production model, the domestic space, the concept of property, the relationships between society, state and market, the world of care and affections… everything must be viewed with these new eyes, because the future that awaits us will depend on a correct identification of the pros and the cons in relation to the desirable scenario that we all together must build. And in any case, we should start from the awareness that this future will inevitably have to be based on short distances and human togetherness.

There are many lessons, positive and negative, that the gigantic planetary experiment of forced confinement has given us to help us to move towards that future. But it is important not to lose sight of the fact that, apparently, this abrupt seizure of the techno-industrial machinery has not yet translated into a significant decrease in the global presence of greenhouse gases in the atmosphere, but only in their maintenance in steady levels. Restarting the machinery without changing its logic does not seem an appropriate strategy form the point of view of the precautionary principle.

From this perspective, the institutional phased approach in the fight against the pandemic appears clearly as the most reasonable, and there should be no the slightest doubt about this fact if we want to avoid a quite disastrous setback, but neither should we lose sight of the fact that our close encounters at the third phase in a hopefully near future should not be dominated by the fear of walking together.